A few new features have been added (or are in the process of being added) to PowerApps for us to review. These pieces are capabilities administrators and governance folks will be happy to see once flushed out.
(10/27) Updates! Per a webinar with the product team today. Shown below…

The Admin Center is available in the settings dropdown and allows you to manage both Environments and Data Policies.

Once in the Admin Center, the view defaults to Environments.

I created a Demo Area environment just to have another one listed for now. There’s certainly seems to be room for more controls here, so we’ll see what else gets added eventually.

Note: Navigation is a bit odd right now. It appears the only way back to the PowerApps page from the Admin Center is by using the waffle control – which opens a new tab. Being able to click on ‘PowerApps’ in the top might be useful and more consistent with how SharePoint in O365 works.

Now that we have the Admin Center to launch from, let’s take a look at what’s in it.

Environments available to you are visible in the upper right in a dropdown. As an Admin I can see the default environment and a new one I created. The dropdown control will switch you between environments while working in the PowerApps interface. If you’re browsing around and it seems like apps or connections are missing you’ll need to remember which environment they belong to.

Note: Switching environments brings you back to the Home page for that environment. I haven’t decided if I’m a fan of that or not… it might be nice to be able to stay on the Connections or Apps page and switch between environments within those pages quickly.

Environments are managed in the Admin Center (see screenshots above or below).

Note: Creating a new environment differed a little from the initial PowerApps post in that I didn’t see any controls for a Database. Update: This is addressed by latest blog post from the team. Some features are unavailable while changes are rolled out. 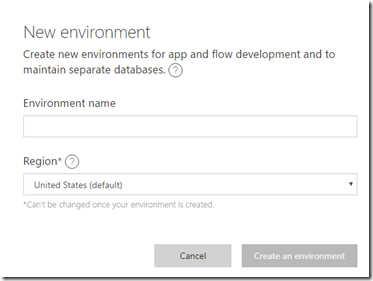 Once you’ve created a new environment it shows up in the list:

Selecting an environment drops you into the environment details page which defaults to the Security groups. This is another page that looks ripe for enhancements. We’ll see what else eventually gets built here. Will there be a need to add additional roles? What’s the reason for the additional left-ish nav control that currently only lists ‘Environment Roles’? Update: Well, more stuff. 🙂 In addition to ‘Environmental roles’, we’ll see ‘User roles’ and ‘Permission sets’ coming soon. Additional environmental roles were also mentioned…

Digging a level deeper we can add users to a group. As the person who created the environment I’m automatically added to the Admin group. ‘Details’ here shows the name and description of the security group – which are currently not editable. 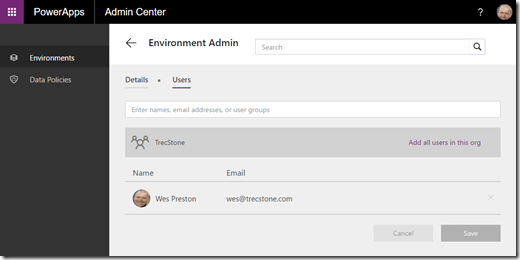 ‘Details’ for the environment shows just that. But also nothing that appears to be editable at present. 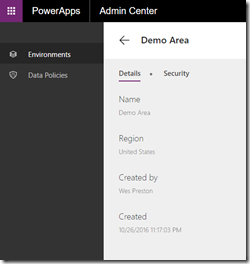 I’d hope to eventually see a way to edit the name of an environment, if nothing else. Also missing is a way to *delete* environments. I expect the default to be locked up, but it seems logical to be able to remove the others. Maybe name changes and deletes will be available via PowerShell or via some other method.

Also in the Admin Center is management of Data Policies. Data Policies allow administrators to control which data and connectors can coexist in which environments. This functionality still needs some clarification. Hopefully it’ll be cleared up as documentation is released.

When adding or editing a policy, there are two configuration pages here: Choosing the environment – ‘Applies to’ and choosing how data groups are used within those environments – ‘Data Groups’.

Something that didn’t immediately jump out to me is the Policy Name editing, available at the top of the page.

Note: It might be nice to add a ‘Description’ or ‘Notes’ field here as well. Otherwise folks are going to need to use longer, more descriptive policy names. Time will tell.

Choosing environment seems pretty straightforward. You’ll be able to set specific policies for each environment and/or broader rules to multiple environments at the same time. 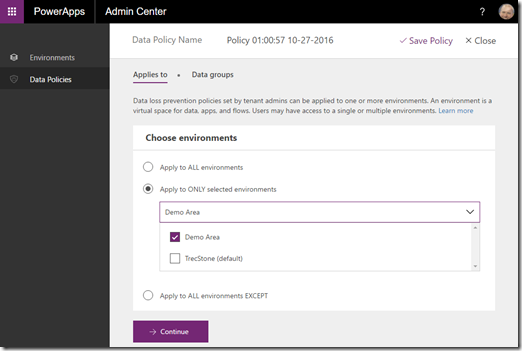 Note: One thing I saw that was a bit wonky was after selecting ‘Apply to ALL environments’ and saving the setting actually changed to ‘Apply to Only selected environments’ with both environments checked. So, functionally was ultimately the same – but a bit confusing from a user experience perspective.

The Data groups page is a bit more confusing. (the ‘Learn more’ link doesn’t currently work) If I interpret this correctly you are defining which connections or services are allowed by the apps in the environment. 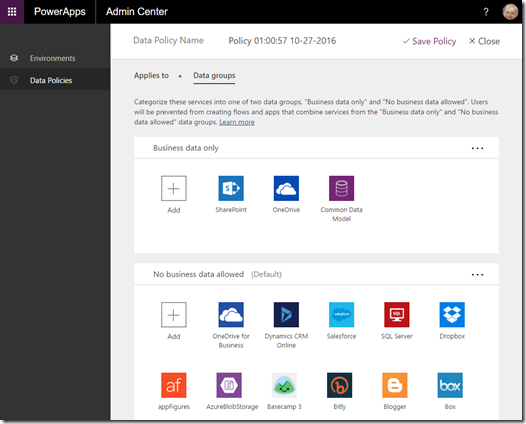 Note: Hopefully verbiage can be made consistent if that is the case… it might be confusing to use both ‘connections’ and ‘services’ when talking about the same thing – though it does seem pretty intuitive. I’m just getting nitpicky here…

At this point, TBD (To Be Determined). It’s too early to tell, but these are the kinds of controls that IT Pros and/or governance folks are pretty happy to see.

As it has with the unofficial SharePoint motto “It Depends”, I’m sure there will be conversations about these going forward.

First off, PowerApps is still in Preview and features are still in the process of being rolled out and refined – so nothing to gripe about. Just some findings. I happen to think PowerApps is going to be a pretty spectacular product… just to be clear.